CD’s or the compact disks have literally ruled the world of multimedia for a pretty long time. Before the arrival of DVD and bluray technologies they were supposed to be the best medium of storage of data. But as the time kept passing with more and more advancement in the technology they are literally wiped out. A lot of people are still having a large collection with them but all of that is pretty useless. So we are going to turn this trash into some useful art crafts. We are presenting here some DIY ideas to recycle your old CD’s. 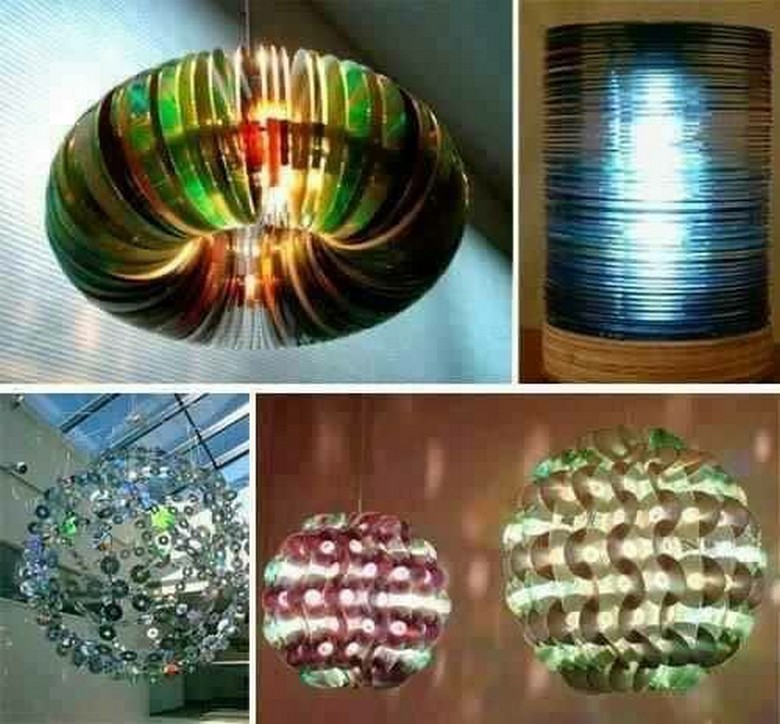 Well, surprisingly many won’t find the use of the old CD’s in this recycled guitar, but actually we can see the broken pieces of the plastic made CD’s in the entire structure of this great decoration piece that is embedded in colors and charm. 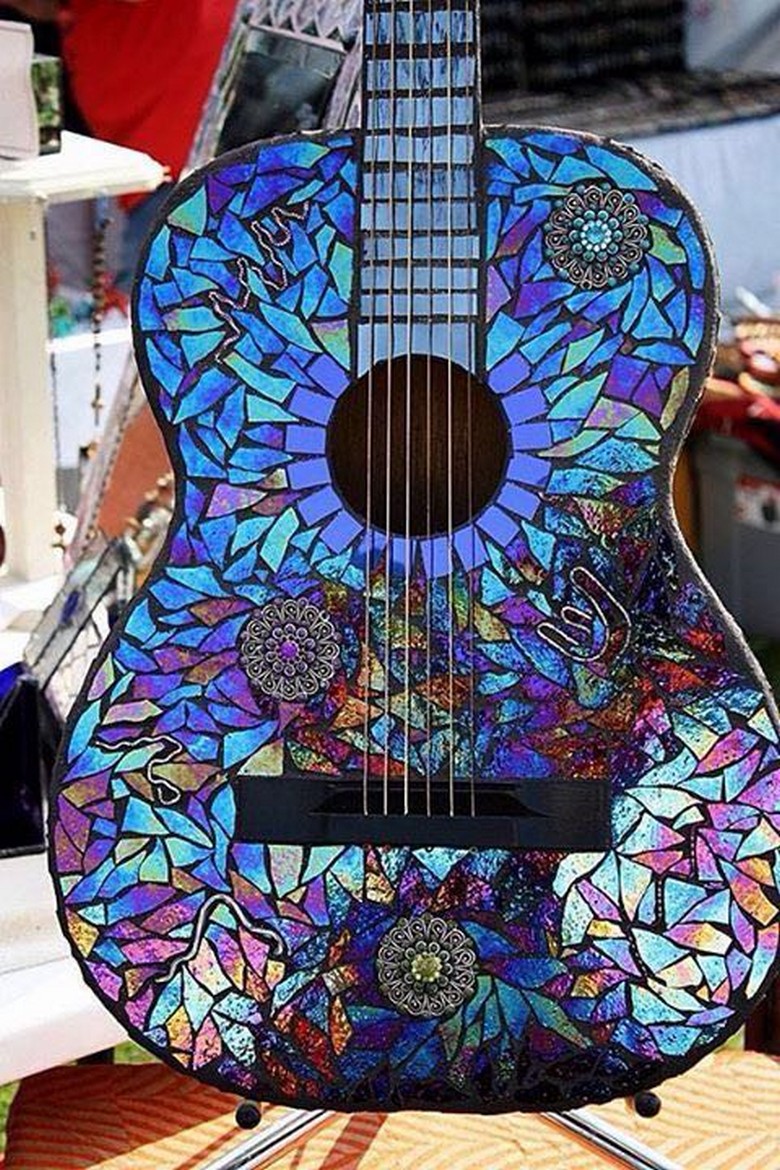 Even their presence isn’t so pretty clear in this caricature of the bird. But having a close and detailed look we immediately realize that this whole caricature is the product of the broken pieces of CD’s. They are so smartly combined or shaped in this way that is not simply possible for some ordinary crafters. 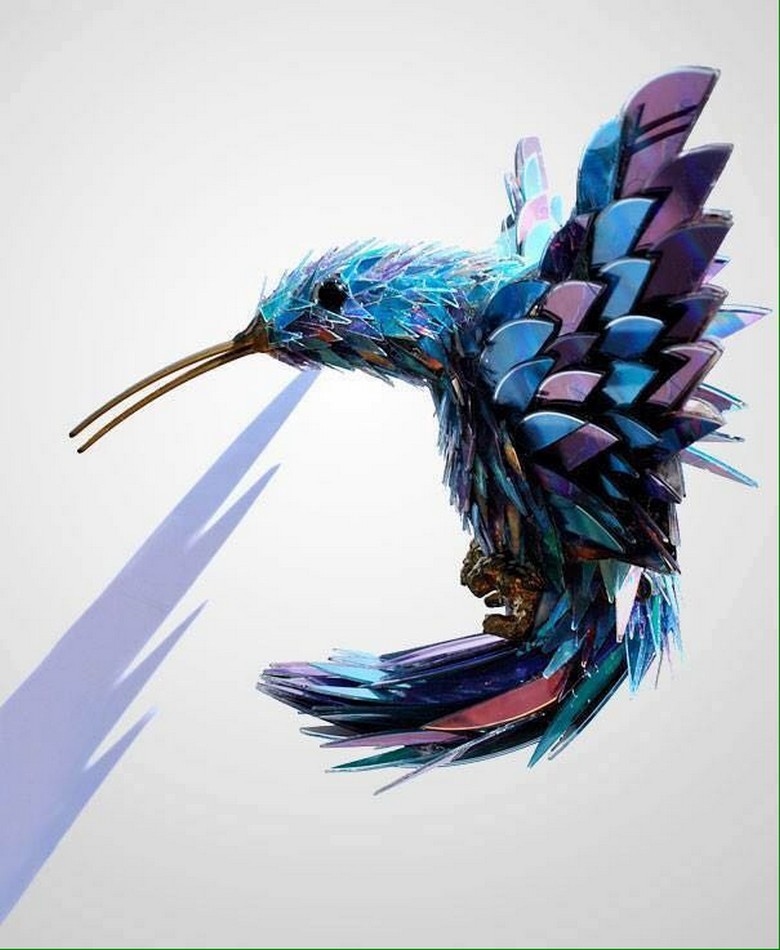 These lighting globes are more like the disco lights that we see in pubs and disco clubs. But what if you bring them right inside your house? You would have to call a party man. CD’s are simply pierced and combined together with metallic wires. 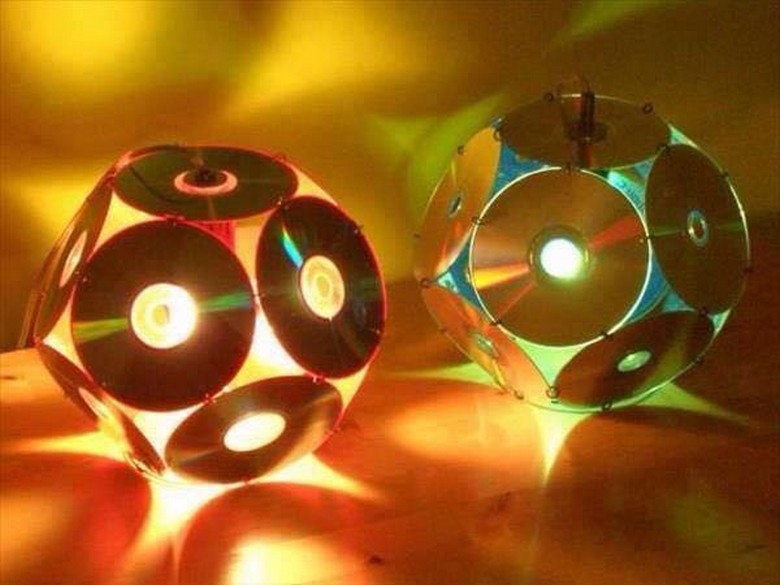 And this is a smart garden décor idea. This whole caricature is made using some trashed stuff that we really had not to buy or arrange. Like half of this is made with old tire and the rest especially the wings are made with recycled old CD’s that are the main theme of this project. 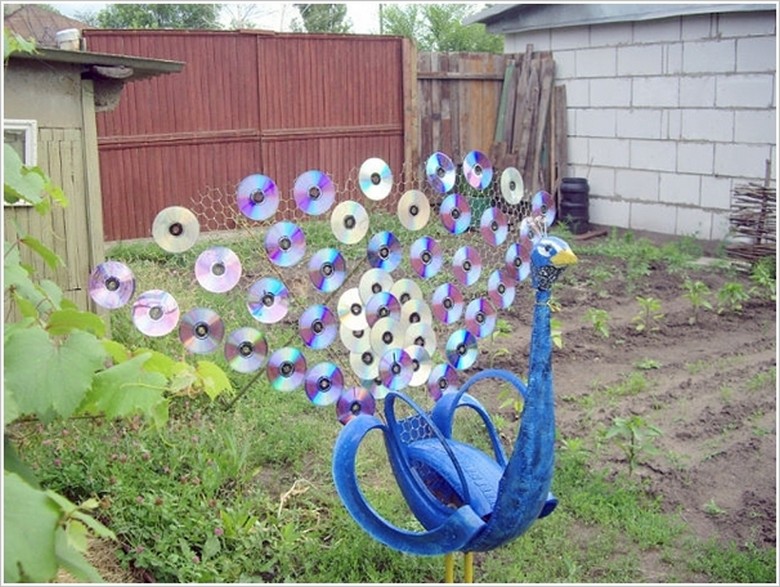 This one is again a so damn complicated caricature. Just focus on the cut pieces of the CD’s that we have consumed here. Well, they were broken in a certain cornered shape to make a perfect wing, and then each and every piece is placed with sheer concentration. 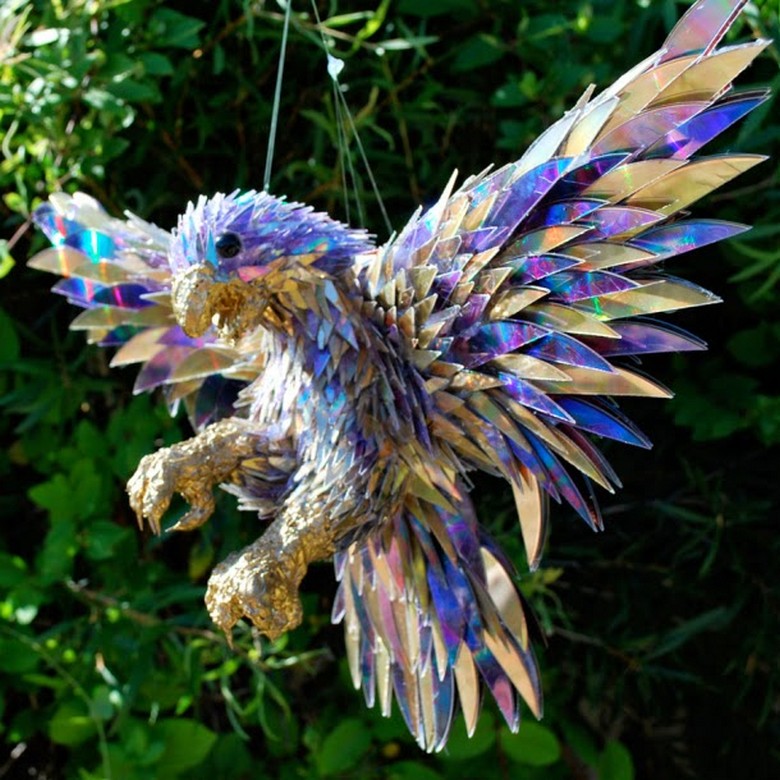 Wow, making this hand bracelet wasn’t that hard again. The metallic frame was certainly reclaimed, and we have stuffed it with some evenly broken pieces of the same CD’s that were of no use any more. And this just turned to be smart jewelry article that would be noticed immediately. 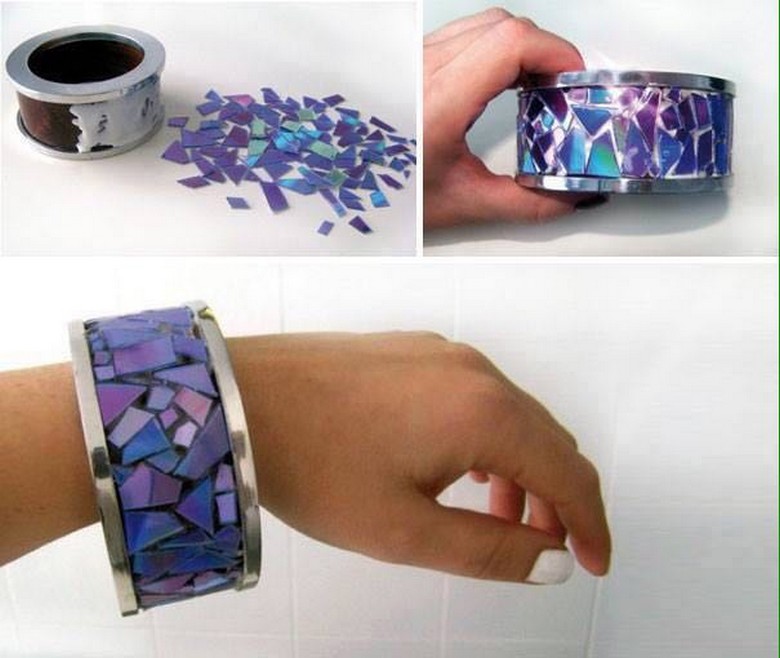 Who would bother to see the Eifel tower when he or she has got this shining tower in the patio or the garden. This huge structure was made using some ordinary materials like just a pile of garbage say, and then it was covered and wrapped with these useless CD’s that we just wanted to get rid of. 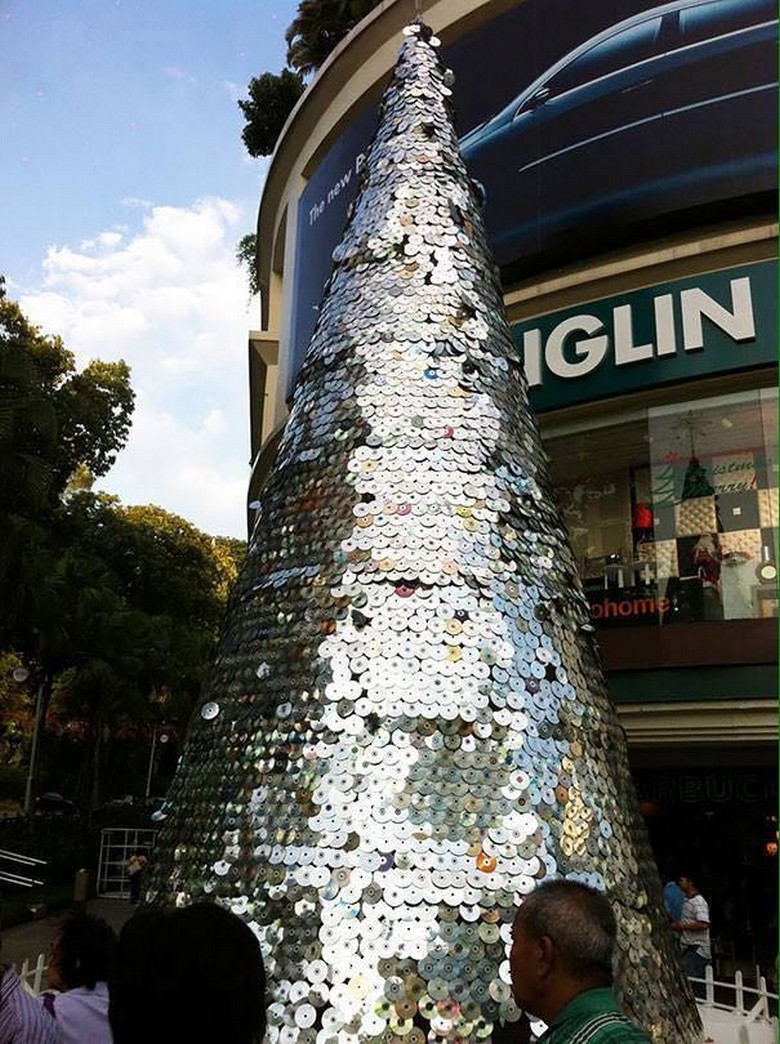 And here we come up with a more artistic rather smart idea. Although this is not a properly functional wall clock but it merely seems like one. So what it won’t tell you the time, on the other hand it would gain your attention as a smart wall décor item. 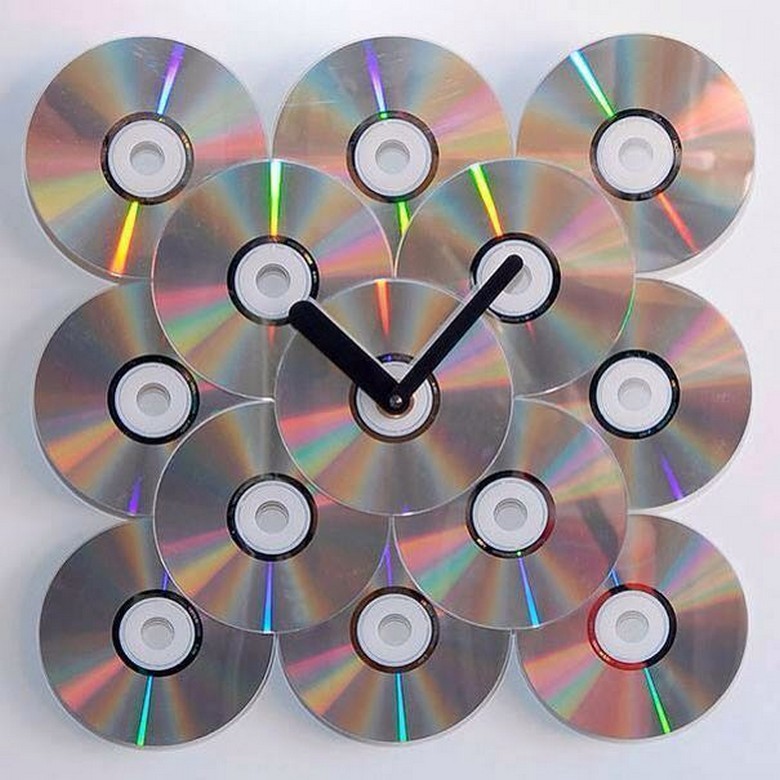 Having a distant look of this mirror it seems like the entire surrounding of the frame is studded with the broken glass pieces. But don’t get confused, these are the broken pieces of CD that we have pasted here using some glue. 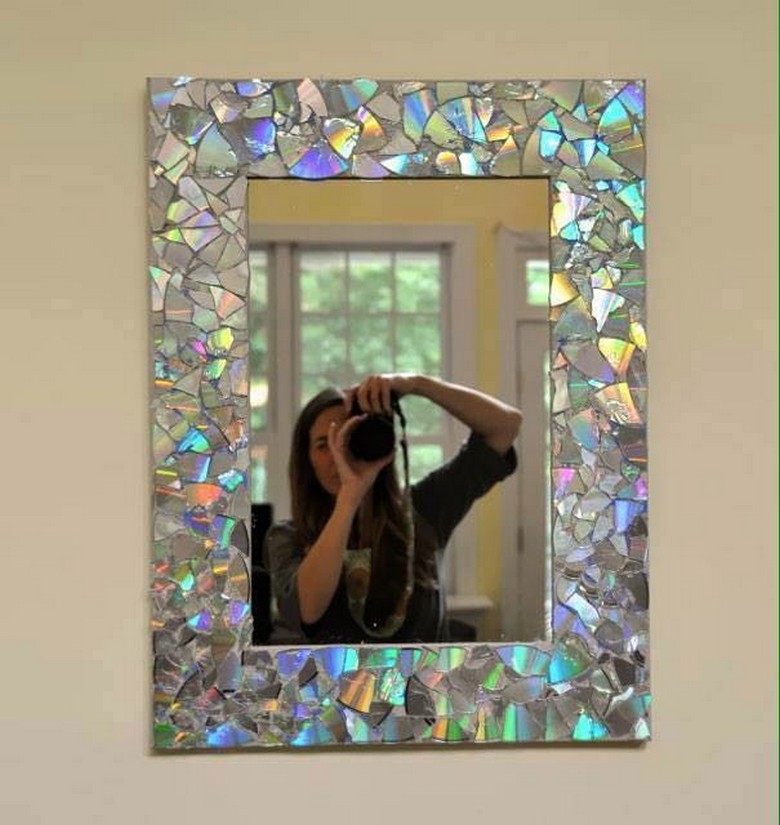 This could be another garden décor idea like we have got some printed photos and we have attached the round CD’s on the base making it look like as if they all are riding the bicycles. This smart 3D art craft is all reflection of a genius and a cunning mind. 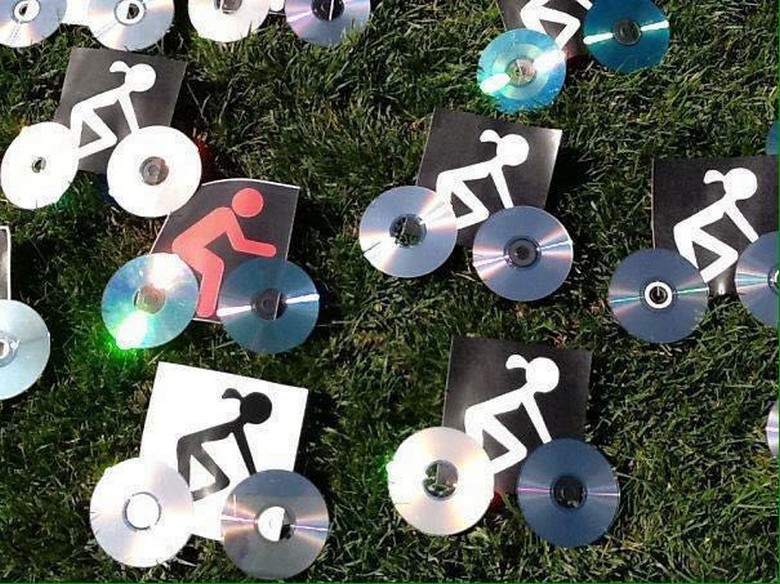 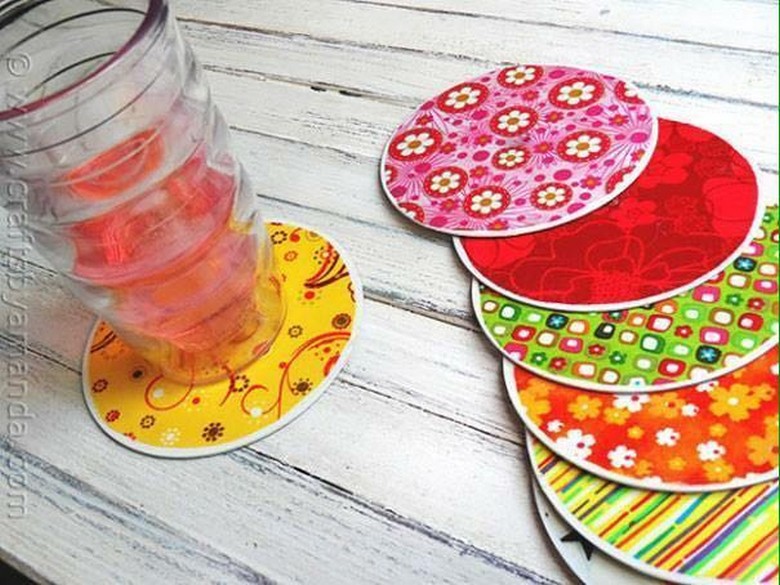 I don’t really know from where such a large pile of the CD’s was arranged actually, but whosoever has done it he must be applauded for this crazy art craft. Like it would have taken days for the completion and a total dedication and devotion too for making this strange art craft. 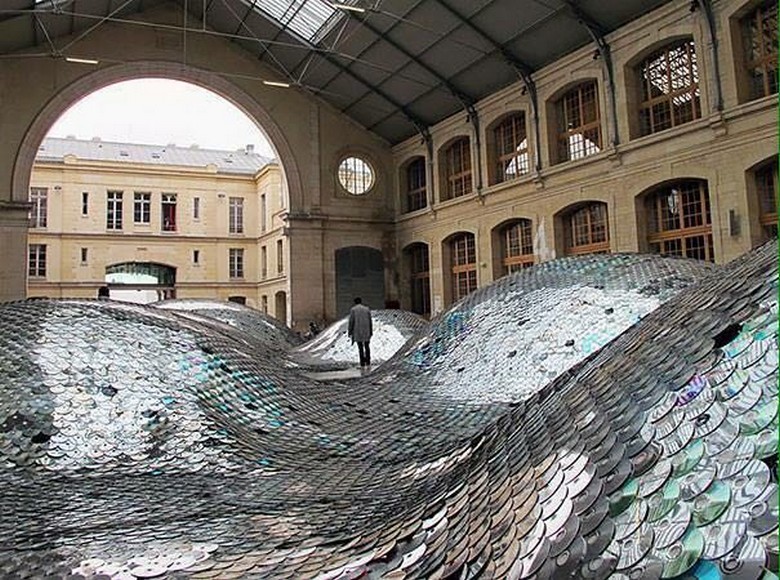 This is an ordinary pair of snickers that was ordinary as well unless we hadn’t done this crazy addition on the rear of the shoes. What we did here again, we just pasted some random pieces of the CD’s on the rear and with their shine this turned to be something so fancy and attractive. 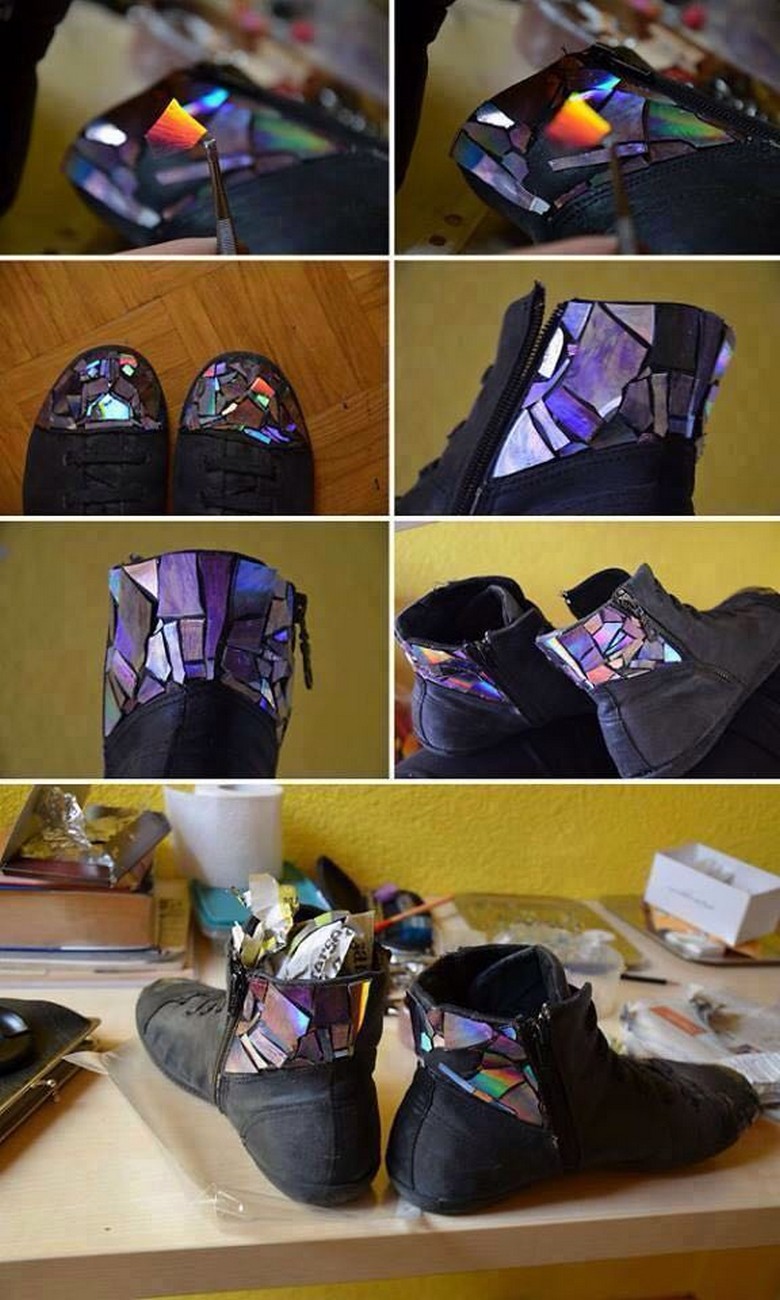 And I really like this smart idea man. The same CD’s were used as the base, and accurately stitched and sewed covers were wrapped around them making it a storage case where several accessories could be placed so smartly. The things that must be kept away from the access of kids. 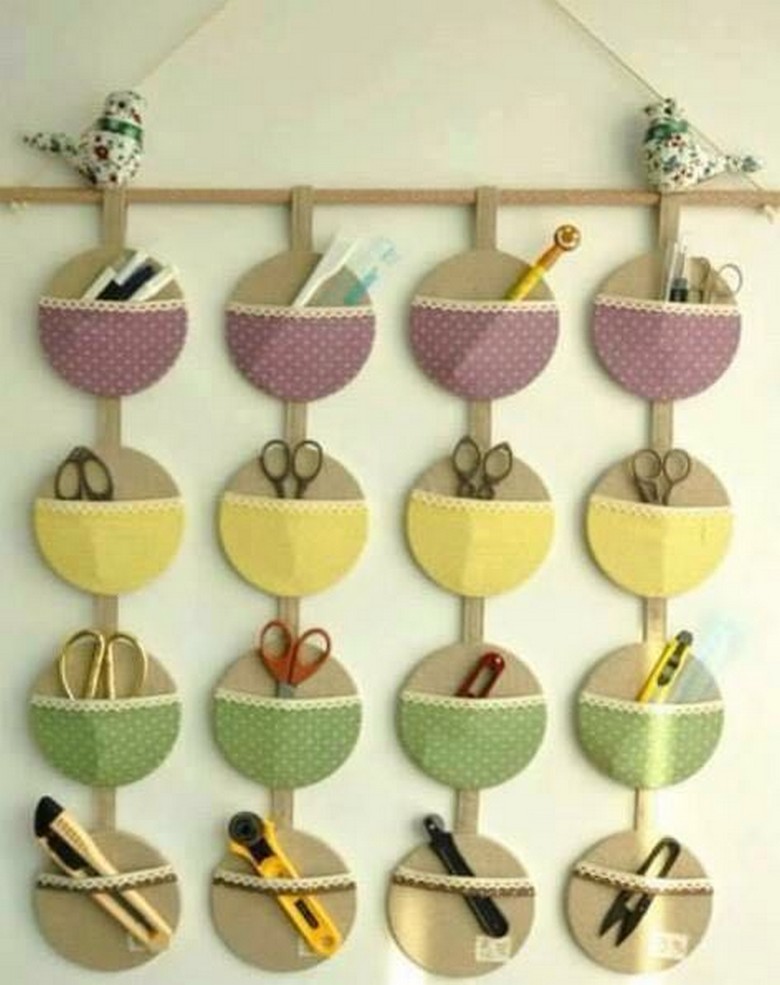 What about this one? Isn’t this incredibly beautiful? This tissue box is all covered with squarely cut pieces of the CD. They give a really very fancy and shiny ornamental touch that would leave you speechless as this would be hard to figure out what exactly this box is made of? 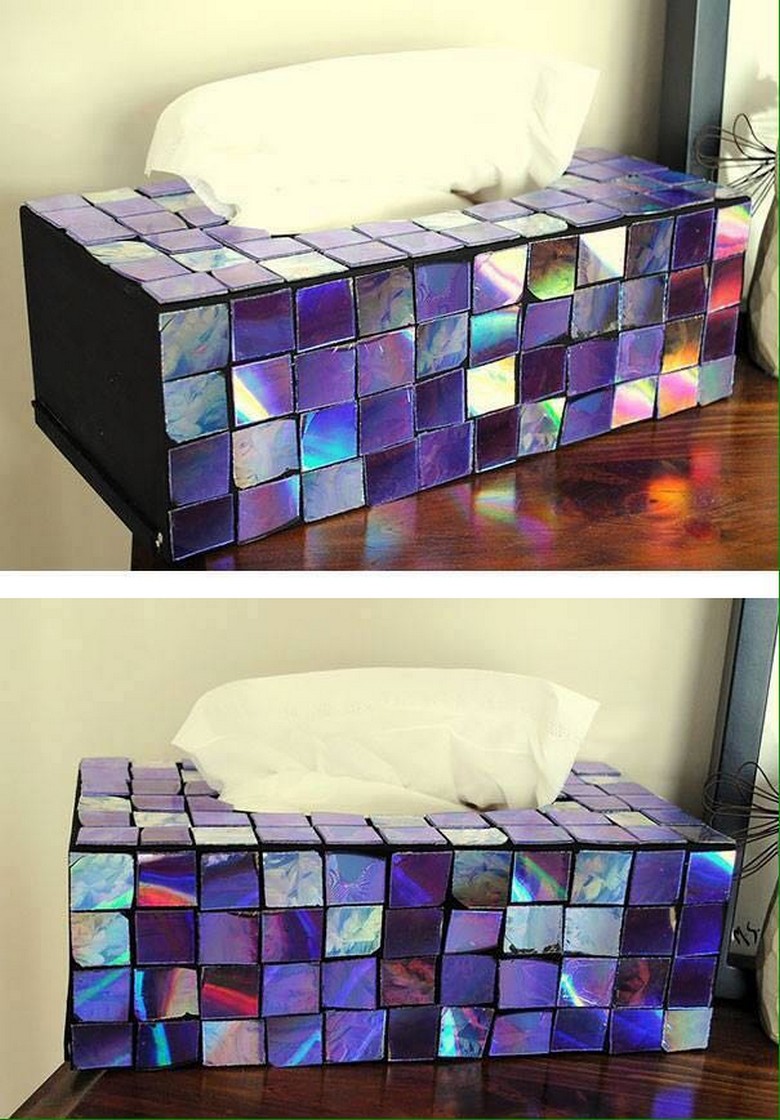 We didn’t stop just there, but we are moving a step further. Many would call us insane but who cares actually. We have used the CD’s cut pieces of the top of this wooden table. This seems like the depiction of a certain art that is usually done on the wooden furniture items. 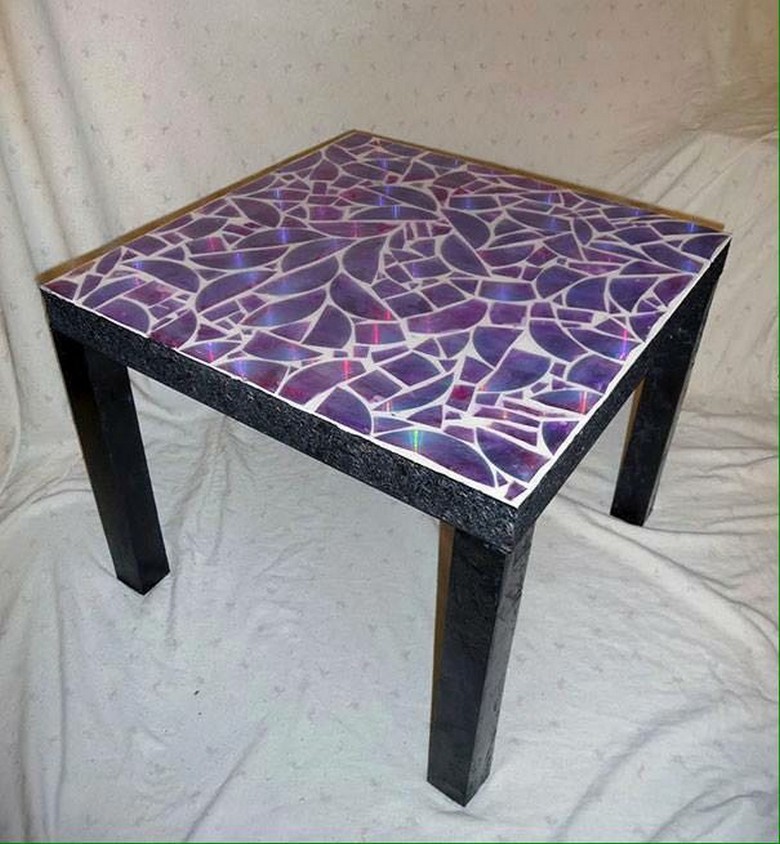 Here we are presenting several inspirations where we have used them in the base of artificial flowers. These flowers would be so firm and being so erect they could be used as embellishments in several random projects. 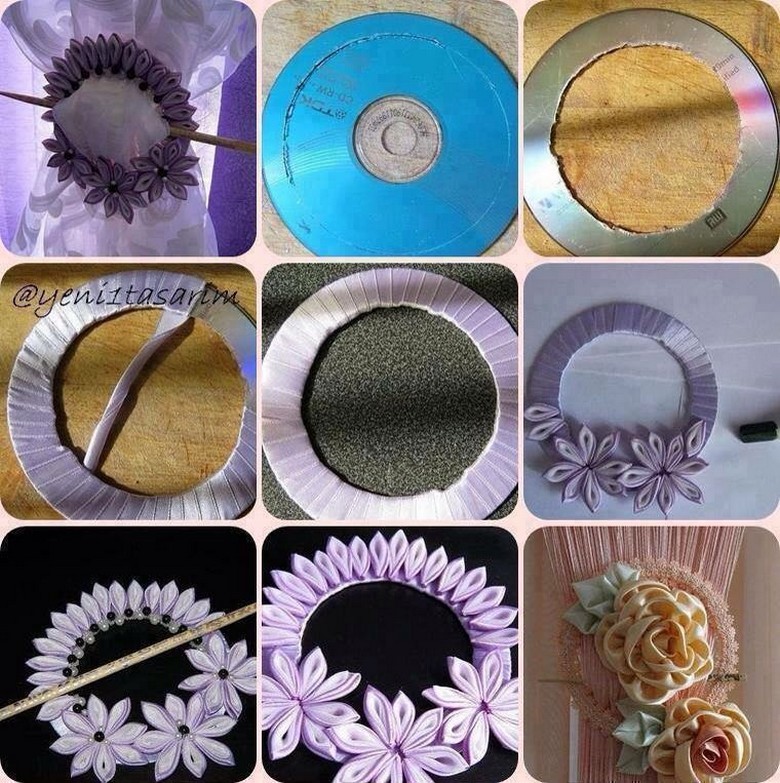 And this chime is again going to be so easy and inexpensive while at the same time it would grab all the attention immediately. Each CD is connected with the other one with a metallic wire that is crossed through the pierced whole and twisted later on. I would really urge all the crazy crafters to try these cheap crafts, they are easy, they are handy and they take no money at all. 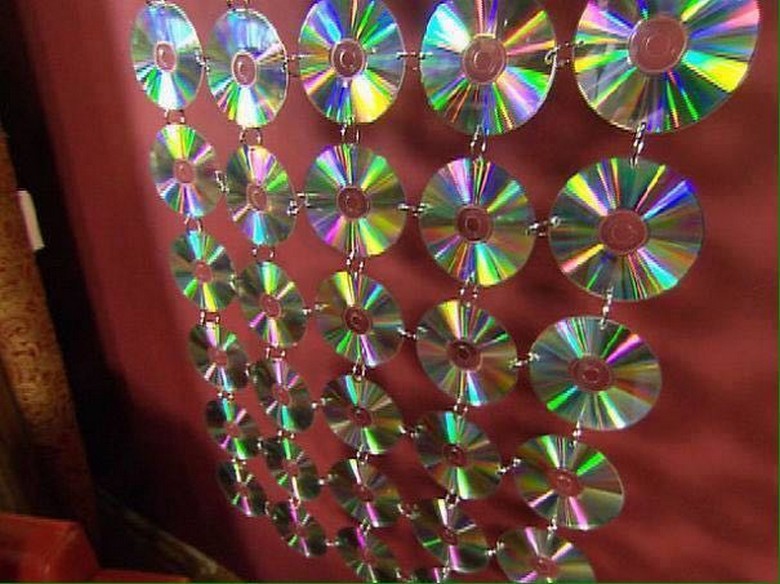